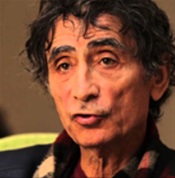 A few years ago, some neighbours moved into the house next door who were suffering with alcoholism, drug addiction, economic lack, and a variety of other challenges. The house attracted many others, and became a sort of meeting place that brought forth loud booming music, late night parties, screaming, fights, property neglect and damage, collateral damage around the neighbourhood, and frequent visits by the police and ambulance.

For a while, I "suffered" along with them, frequently being affected by the disruptive behaviours, and often being fearful for the safety of myself and my home, to the point that my husband and I began making plans to sell our house and move. And although I had some compassion for their suffering, I still saw them as completely separate from me and I saw them as "less" in many ways.

And then one day I had a profound realization... that they were EXACTLY the same as me. That they were simply caught up in the compelling nature of their own insecure thinking (just as I often was), acting out from their believed thoughts in each moment (fighting, yelling, damaging), and often looking for any relief (via drugs, alcohol, partying) from the feeling of suffering that was unknowingly being created through their innocent belief in the chronic nature of their insecure thinking. They were simply and innocently doing the best they could to manage the "scary world out there", not realizing and seeing what was "in here".

All of a sudden, everything about the situation and about life made complete sense to me. All the whys and hows of everything in life became completely clear. I no longer saw the neighbours as less. I saw them as exactly the same as me. I saw all the joys and kindnesses in their behaviours and not just the moments of their suffering behaviours. I could see how we were intrinsically connected in ways that are now completely obvious and in many more ways that could barely be articulated but could be profoundly felt. I had completely new eyes for how I saw them and a completely new heart for how I experienced them. I loved them without condition.