One Thought Changes Everything 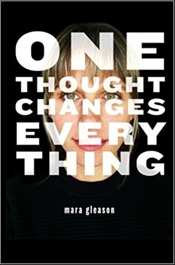 In my late teens, I was held up at knife point.

At first when he asked for all the money in the cash register, I said "Oh yah, that's funny". I thought he was joking. He demanded again, and I laughed again, and I gave the same response. His third request however included showing me the 10" knife that he pulled out of his sleeve. I was not at all scared, I just thought "Oh, OK, I'm being held up. I should make note of what he looks like and what he's wearing, and take note of his height against the height markers as he walks out the door".

I gave him the money, and then he asked me to go into the back of the store. I simply said "No". He then walked toward the end of the counter that was between me and him. I thought he was going to try to grab me and force me into the back room, but he ended up just reaching out to cut the phone cord and then ran out the store. In every moment of this experience, I was completely calm, and even after, I had no fearful thinking about it, other than a brief thought that being taken into the back room would not have been a good thing.

At various points in my life I've had strange things happen where I found myself "somewhat separate from my personal thinking"... such as having time slow down and being completely calm in the middle of a car accident, or having a "heart stop" during dental surgery and then being kept awake during the procedure... watching spurting blood and hearing the cracking sounds in a state of fascinated interest and amusement, or waking up after emergency surgery, being able to see myself in the bed and my sister sitting at the bottom of the bed as if viewing it all from above, or suddenly realizing someone had died and finding out later that they died at the moment the thought came into my head.

In each case, the feeling was calm and clear and peaceful, with no personal emotion or personal attachment involved.

And then a few years ago, after hearing a description of the Three Principles, I had an experience where for the better part of 3 days, I lived in a state of what I can only refer to as impersonal, unconditional love... being completely detached from the personal "me" and my personal thinking, including moments where the separation between everything was blurred.

At that time, I realized the illusion of all thought, and I saw how heavily our personal thinking weighs on each us, and how we just can't see this because we have literally been living in the experience of our made up thinking since the moment we were born. And any brief moments we may have, free of personal thinking, are often not understood or not given any significance.

The interesting thing, is that when I talk to many people, whether friends, colleagues, relatives, clients, or many that I chat with at the local homeless shelter, most have one or two stories like this... being incredibly calm and clear in crisis, being in the zone, having time slow down, experiencing something incredibly strange or profound that was about something other than their "personal self".

Mara Gleason starts off her book "One Thought Changes Everything" with her own story of being held up (at gunpoint), and the significance she realized from that experience years later. It's a great story, and a compelling book to read if you're interested in getting some sense of what lays beyond the perceived limits of our personal thinking. Here's Mara's story shared by Michael Neill in his weekly blog...