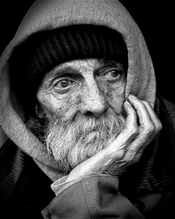 He was on his bicycle, which had seen better days, and so had his clothes, being ill-fitting and likely unwashed for days. He seemed quite old to be on a bicycle, but perhaps that was just the physical imprint of a difficult life. He was peddling down the street with two swaying bags, one strapped to each bicycle handle, and with both bags filled with beer cans to be taken back to the store for the deposit refund.

He was likely one of those I see occasionally digging through garbage cans and scanning through parks where beer cans tend to be tossed away by the many who can't seem to be bothered with the effort of returning them. This man on the bicycle saw those cans differently.

In the past I would have seen this man in a variety of different ways.

On this particular day however, that sense of separation and comparison, and perception as less didn't happen.

As we drove by, a powerful and physical burst of connection filled my heart. I saw that he was neither less nor greater than me. I saw that we were, in a significant and profound way, exactly the same. And although his circumstances and appearance indicated that we lived in very different worlds, where mine appeared to be the eminently preferred one, I realized in that moment that the idea and judgment of "separate" and "less" was completely untrue.

I KNEW that I could be on that bicycle, I could be him, and I would be perfectly fine... and could in fact, be wholeheartedly joyful. I KNEW that although his outer appearance appeared to tell me a story, whatever was in his mind in that moment was completely hidden, and could have been an experience of complete contentment. In that moment I saw that he wasn't slumped over in hopeless defeat, but was simply an industrious man, sitting upright on a bicycle, peddling through town on a spring day. At the same time, I was a woman, running errands around town in a car, and looking out the window as I passed by. Two human forms modulating within the energetic exchange and movement of life. Equal and incomprehensibly connected.

I often wonder if perhaps in that moment, he felt it too.

I can't effectively articulate this moment of KNOWING, but it's one that comes to mind in times when my own personal story, or the stories of our world, appear to be scary or confusing. It offers a felt memory of something much more UNCONDITIONAL and IMPERSONAL about life, something that offers freedom from any immediate need for change, while presenting a TRUTH about life that is paradoxically unchangeable.

I know I'm not alone in my sense of this. I know of others who have their own unique stories of KNOWING this connection or realizing this awareness in their own unique way. My guess is that everyone intuits this in some way, even if their own intellect tends to reject it. My guess is also that whatever stories we may hold about what our life or this world means, it may be worth a moment of reflection to look beyond what appears to be the chaotic circumstances in any moment. Beyond the visible there's something significant and solid and beautiful to be found.