We Belong to Each Other 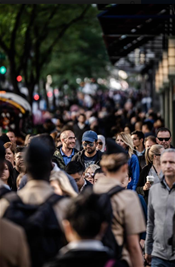 "Don't be concerned if you see us roughing them up a little bit. That's what we need to do to keep them under control. You won't likely have any safety issues with them living next door, since break-ins are not what they tend to do, but maybe keep a bat at the back door just in case."

It was early Spring in 2013. We were having concerns with the new neighbours who had moved into the house next door. They showed a few moments of happiness (connection, care, conversation, laughter), but I didn't really notice that. All I noticed was their many moments of suffering, and their desire to ease that suffering in the form of behaviours that we were becoming increasingly afraid of... intoxication, yelling, physical violence, and all the chaos that accompanies them.

As a consequence, the police, the paramedics, and the ambulance services, were occasional visitors to the home.

Many of our new neighbour's behaviours appeared to be related to drugs and gangs and illegal activities. There were also a lot of strange events and behaviours that we couldn't comprehend or make sense out of. For those first few months, with our growing concern and my keeping an eye on all that was going on, I began to feel like a not-so-funny Gladys Kravitz. My husband became the researcher, looking for any information he could find on local gangs, which just compounded our concerns.

A few months after our new neighbours moved in, we finally decided we needed to go to the local police to find out what was going on and what the risks were. I don't know if I have some level of insecurity with authority, but I was nervous about having to speak to them. However, it was necessary... we were seriously wondering if we needed to sell our house and move.

The officer who greeted me at the local police station, didn't seem to be that happy himself. He looked lethargic and sort of inconvenienced by my arrival and didn't really make much eye contact. He wasn't that chatty, but he listened to what I had to say, and then spent about 5 minutes silently looking at the computer, reviewing the reports he had for the address that I gave him.

When I voiced that "we were concerned", he eventually confirmed, with his eyes still on the screen, "Well, you have a right to be concerned." I don't know if that made me feel relieved for realizing we weren't exaggerating things, or if it made me feel more concerned for our safety... perhaps it was a bit of both.

The officer didn't give me too many more details, other than letting me know that the police were aware of problems at the identified address. He then gave me a telephone number for what I think he referred to as "community police"...a few officers assigned as liaisons to our community for this type of issue.

When I phoned the number provided, the first officer I spoke to was much more energetic and very talkative. He shared information about the situation and gave us his advice.

I appreciated having more information about the occupants and activity in the home... I think it gave me the illusion of some control in a situation that appeared out of my control. "Oh, at least I understand better exactly what's going on now and why"... a breath of relief.

Unfortunately, at the same time, I was given a new concern... Although I appreciated all of the information, I sort of felt that this officer told me more than I probably should have known about other people's lives. And, he also shared one thing I really didn't want to know... "Don't be concerned if you see us roughing them up a little bit. That's what we need to do to keep them under control".

I had no idea what to say. I didn't have the courage to either address it or ask more questions to better understand it. I just stayed quiet, and allowed the conversation to continue, as if what he said was OK and normal, even though it was not OK and normal in my mind.

Although I was shocked by what the officer said, there was also a part of me that maybe wasn't surprised. Perhaps that was because of cop movies I had seen or occasional news items of some officers being violent. Perhaps it was also knowing that some members of our community are routinely seen and treated as less.

And although I didn't realize it at the time, I was also seeing my neighbours as less than me in some way as well. I may have had compassion for their suffering, but it came in the form of, "wow, their issues and addictions are bad, and thank God I don't have that".

What I didn't at all see, was my intrinsic connection to them... I completely missed seeing any of their beauty, and I held no reverence for their humanity or our common humanity. I saw that they had problems, but it NEVER occurred to me that they and their problems belonged to me in any way. I saw them as completely separate from me.

The bigger part of my surprise with the police officer's admission, was that it appeared to be so easy and safe for him to share something with me (a stranger) that was clearly neither legal nor humanely acceptable. I didn't really explore that in my mind any further at that time. My mind was on my own problems and it never occurred to me that this issue of police violence toward others was also my problem.

With all the recent attention on the insecure state of our systems and structures of society and law enforcement, this whole experience seems so much more prescient. It's a reminder to me of how easy it can be to look away when I think the problem isn't mine... and when I think that any other human being standing in front of me, or living next door to me, or policing in my neighbourhood, doesn't belong to me.

During that Spring, the issues next door continued to escalate. The warmer weather meant open windows and louder music, and it meant that our neighbour's suffering could more easily spill out onto their front lawn and throughout the neighbourhood.

And then one day, out of the blue, I had some sort of profound experience that gave me a new set of eyes with which to see the world. My husband's and my experience of, and our relationship with our neighbours, completely changed, and my life and career was set on another path... but that's another story.

In the meantime, my reflection on this experience is not something I'm ashamed of. At the time, I had no idea how to listen deeply, either to myself or to the world. I was completely blind to the illusory nature of insecure thought and feeling, and how it informed my sense of self and drove my behaviours and separated me from my fellow human beings.

Seven years later, I'm much more connected to humanity and much more at peace with life, but I'm still learning to listen. And what could be more important than for me to keep listening deeply? After all, we all belong to each other.